I had just arrived in Finland and the sun was shining beautifully. Then I looked at my watch. Time 8 P.M! Something must be wrong.

Half an hour later, I checked the time. Besides, the sun was still out. Confused, I inquired from my Finnish host, who told me that it was summer (it was freezing) and the sun does not set until 10 pm.

Well, surprise, surprise. This was the beginning of a broken internal sleep clock. It took my circadian rhythm a while to adjust to life in the Northern hemisphere. In Kenya, the sun rises at 6 am and sets at 6 pm.

This was my first time travelling outside East Africa, and my first ever on a plane.

Once my body clock was in order, I began to take in the sights and sounds of Finland: Home to the midnight sun, Aurora borealis, Nokia, and filmmaker Mika Kaurismaki.

I was in Finland on a month-long Foreign correspondent programme. The Ministry for Foreign Affairs invited 19 young international journalists, from 18 countries. We were in Finland to learn more about Finnish society and way of life. The programme included visits to Finnish giants like Nokia & Olkiluoto Nuclear Power Plant. And cultural sites visits among others The Real Santa Claus and excursions to Åland islands, and Lapland

I was the only female representing Kenya, and Africa. The other African was a man from South Africa. As a group, we looked like a mini-United Nations.

During my first week, after not spotting a neighbour in sight, I took it upon myself to make the first move. With this in mind, I knocked on my neighbour’s, a broad smile plastered on my face, ready to exchange some pleasantries. By the way, it took me about half an hour to compose myself and get my greetings right. Small talk is not my forte.

This being my first time outside Kenya, and a time first-ever sharing a house with ‘white’ people, had wrecked my nerves quite a bit. After a couple of knocks, my neighbour opened his door.

He listened, his face contorted in mild annoyance, his door opened to an inch-wide crack. I only got to say hello, my first name before he shut the door in my face. I went back to my room, hanging my head in shame, stunned. In the four weeks that I lived in that dorm, I neither saw my petrified neighbour again nor did I knock on anyone’s door.

In retrospect, the poor man must have been reeling in shock. One needed an access key to get into the apartment, and he must have wondered how a Jehova Witness made her way in! Assuming, he thought I was Jehova Witness since they are the folk who get doors slammed in their faces, a lot.

Lesson learned. Majority of Finns are not as talkative as Kenyans. Finns may hesitate a little to interact with you, if like me; you poke your nose into their business.

You cannot be in Finland and not notice the Finnish obsession with sweating in a sauna. Finns value their sauna rituals, and many will find an excuse to escape into one. For a country of 5,5 million Finns, there is a sauna for every 1,8 people. Do the math!

Our Finnish guide explained to us that the Sauna is a respected place for peace and relaxation. A mecca for sweating out toxins and negative energy. Do not even attempt to bring intense discussions (conflicts) into the sauna. A Finn will kill you with a cold stare if you ruin their sauna vibe. Saunas are synonymous with what makes a Finn, Finn.

In a sauna, one must conduct (behave) himself as one would in church.

As if reading my thoughts on this curious thing called a sauna, which I had never seen or been to before. Our guide went on to explain the Finnish parliament has its sauna chamber, where MPs if they so wish, can debate. Politicians and diplomats conduct diplomacy in the sauna. The phrase ‘imagine everyone naked’ takes a very literal meaning in Finnish saunas.

At this point, I couldn’t help but laugh out loud when the thought of a sauna in the Kenyan parliament crossed my mind. My country’s politicians are not the most civil on Parliament Floor. A sauna, in this case, would turn into a slaughterhouse.

Our guide narrated how Finnish sauna culture conditions equality among Finns. There is no body-shaming in the sauna. All are equal, regardless of their age or size. And that is why almost all Finns are comfortable going to the sauna nude.

Did someone say nude? Yes, sauna’s are a nesting ground for respect and decency. Armed with this equality knowledge, I shed off my clothes and got comfortable in my nude skin. The naked body, when outside the sanctity of one’s home, is vulnerable and human. As I sat in a 90C sauna with fellow journalists, I finally understood what the saunas mean to Finns.

It is easy for a foreigner to conflate the reserved nature of Finns with unfriendliness. But it is true that Finns take time to open up to foreigners, even to fellow Finns. The stereotype of Finns as cold, distant and shy does not apply to everyone. FCP demystified this stereotype by pairing us with a Finnish host family for a weekend.

Luck was on my side! I paired up with an incredible family living in Turku, a town on the southwest coast of Finland. Sara, who was my lead host, and the oldest sister of three, picked me up from the train station, and we formed an instant bond. She was a fellow journalist and world traveller. Her sister arrived the same day from Helsinki, and we took off to their quaint summer house by the lake.

Further, into my adventure, I was welcome with a trip to the sauna. We sat there in the misty semidarkness, naked, talking about life. The smell of wood filling our nostrils and sweat escaping our bodies. I could have sworn that I knew these girls from another lifetime.

After sweating it out in the heat, we skinny-dipped into the cold lake. Theirs was a private, suburban, beach. Sara insisted that the hot and cold extreme was good for blood circulation, and an endorphin rush. I hesitated to take the dive but eventually did, because hey, I am not a party-pooper.

My host family treated me with unmatched hospitality and respect. They took me out to Quintessential Finnish spots. They treated me to a classy meal of snail soup ( Escargot) when I told them of my fear of snails).  I tried to be polite by eating a spoonful without tasting. First and last time I tried snails. Some things are best left untouched.

Saying goodbye to my host family was not easy. They had welcomed me into their home and embraced me as their own. I left knowing that love, compassion and friendship have a universal language.

I came to homogenous Finland a villager but left feeling like a global citizen. Something about the way I perceived myself within the confines of my race changed. I became more open-minded and sensitive to people from other races and cultures.

All in all, Finland left an indelible mark on my life and changed my worldview. 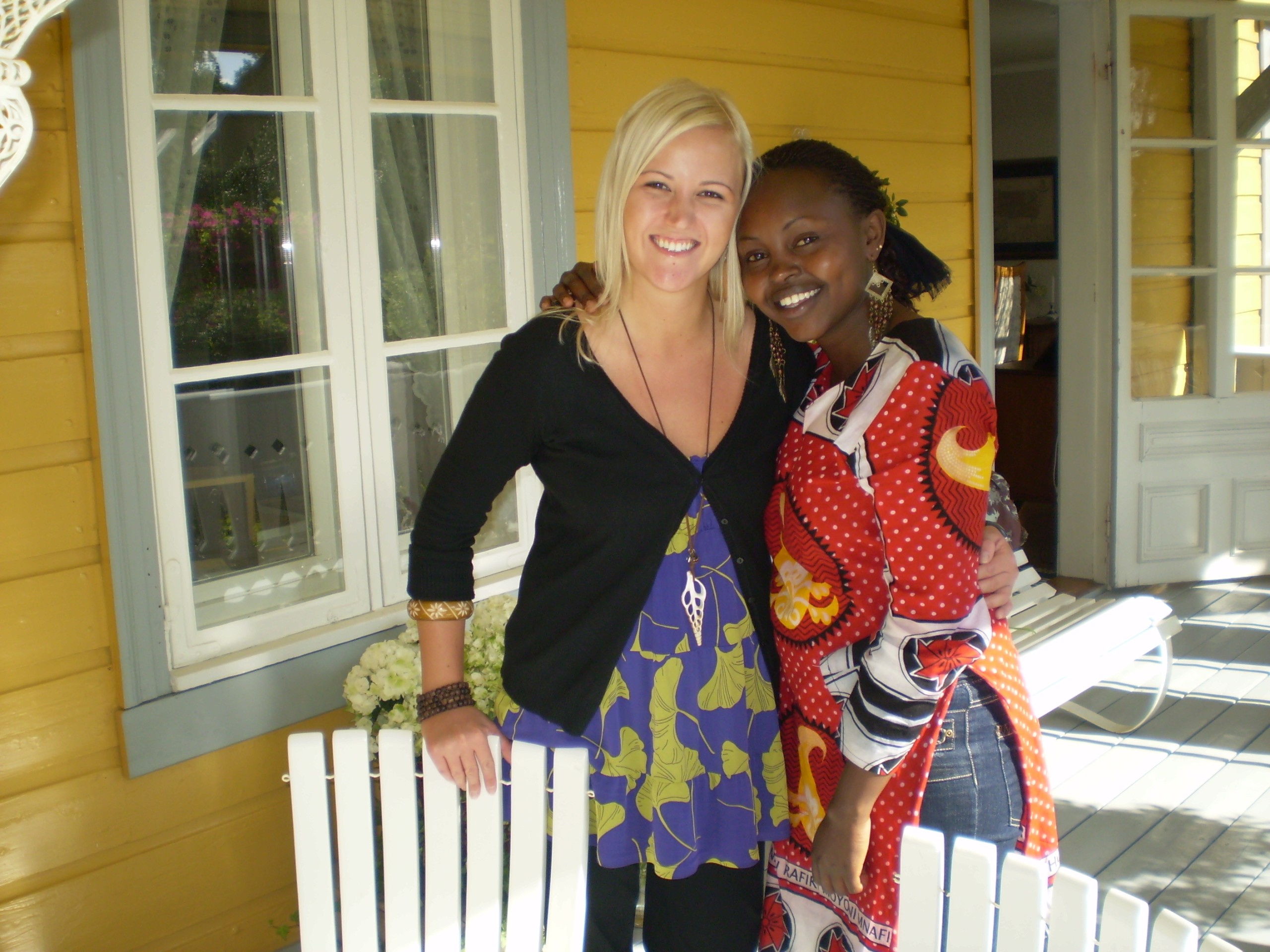 Photo by Tapio Haaja on Unsplash

How empathy taught me a life lesson on bullying

Oh, the folly of prejudice!

Coping with death at a distance and the...

Kenyan in Denmark: A humbling and enlightening journey...

What Stand-Up Paddleboarding Taught Me About Overcoming Self-Doubt

Life on Coronavirus Lockdown in Denmark: How I...

Memoirs of a Kenyan Mom Abroad

Of Mau Mau Rebellion and my mother´s birthday

Simple but tasty Chicken Soup (made from leftover...

Kenyan Pilau with goat meat – a must...

Tilapia Fish Stew Recipe (among stories of a...

This website uses cookies to improve your experience while you navigate through the website. Out of these, the cookies that are categorized as necessary are stored on your browser as they are essential for the working of basic functionalities of the website. We also use third-party cookies that help us analyze and understand how you use this website. These cookies will be stored in your browser only with your consent. You also have the option to opt-out of these cookies. But opting out of some of these cookies may affect your browsing experience.
Necessary Always Enabled
Necessary cookies are absolutely essential for the website to function properly. This category only includes cookies that ensures basic functionalities and security features of the website. These cookies do not store any personal information.
Non-necessary
Any cookies that may not be particularly necessary for the website to function and is used specifically to collect user personal data via analytics, ads, other embedded contents are termed as non-necessary cookies. It is mandatory to procure user consent prior to running these cookies on your website.
SAVE & ACCEPT